Ok, so this blog has been sitting here unwritten for way too long. Char’s been posting like crazy on her other blog so it looks like it’s up to me to keep this one alive. I've decided I’m going to try to post at least once a week. It’ll probably be a bunch of random stuff that went on that week, but it’ll be nice to start posting and keeping people up on what’s been going on with us out in Dubuque.

So basically, I've been working a lot lately. Due to a couple of days off and some overtime that I was fortunate enough to get, I've been working 10 hour days for about the past 6 weeks. While I enjoy the extra money and I've always got more than enough to keep me busy for those extra hours, I’ll be looking forward to going back to 8 hour days next week.

I haven’t been playing nearly as much disc golf as I’d like, but I’m still getting out about once a week with some friends from work. I've also decided that I’m going to give a different putting style a try. It’s still probably the weakest part of my game so it’s worth a shot. It’s called push putting. I've tried practicing out behind the apt a bit and once I got the hang of the technique, I seem to be able to keep the disc on a relatively straight path (which is the idea). I want to get a portable basket so I can actually practice instead of throwing at an imaginary basket. I also still want to try to enter a tournament at some point this year.

Exciting news on the cat front: Sammy is now fully trained to use his feeding box. 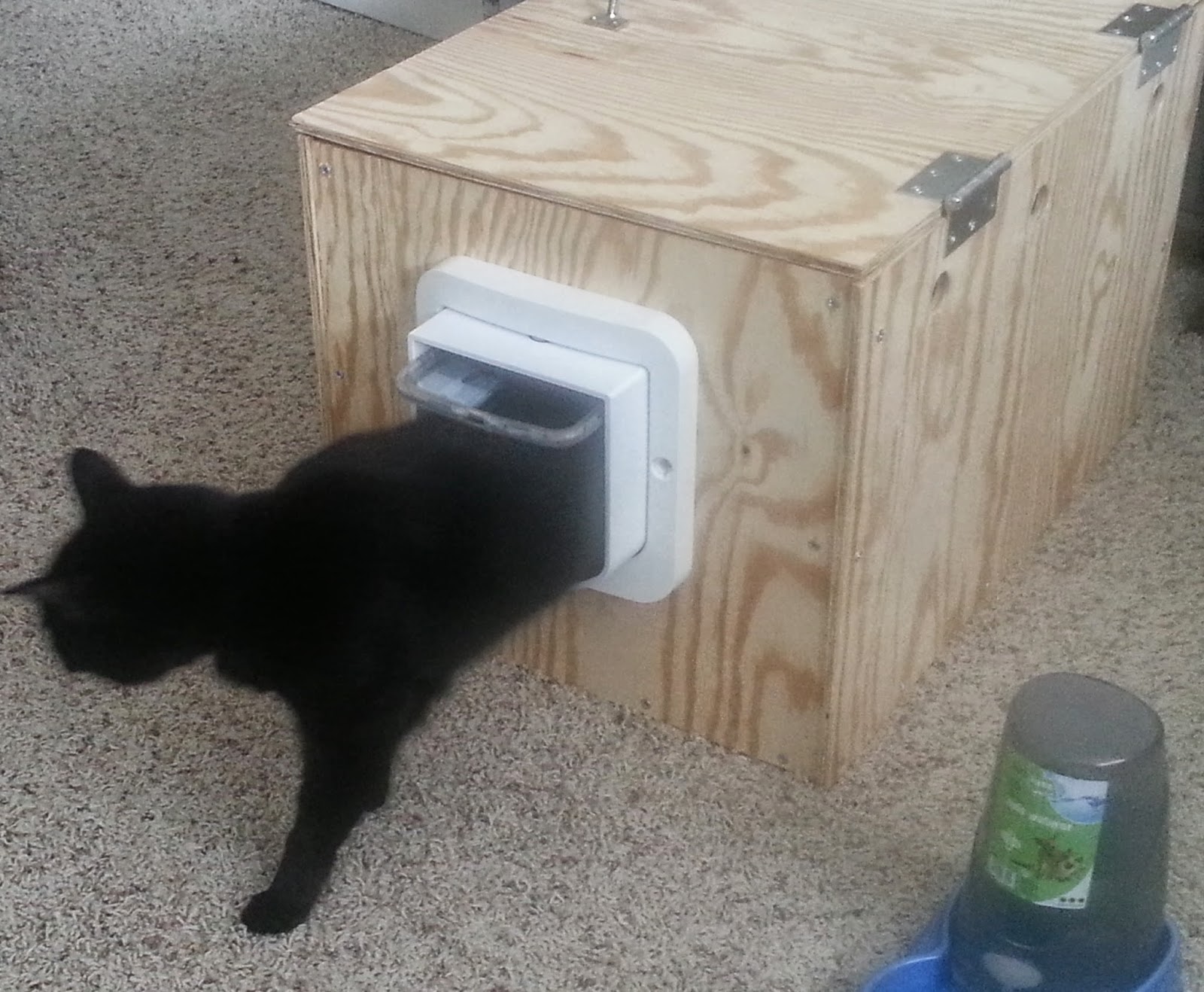 He hasn't thrown up in months and now we can just leave his food out all the time for him to eat at his leisure. We decided to train him in slow steps since he’s an older cat and isn't the quickest to adapt to new situations. I’ll be honest, when we were only part way through and he didn't seem to like the tunnel with a wide open door, I was a little nervous that I’d spent money on the cat door. Sammy, however, pleasantly surprised me when he picked up on pushing the door open all on his own within a day of us adding the flap into the equation. So nice to be able to accommodate both of our cats’ eating habits.

Char and I have gotten out and done a lot of bike riding the past 2 weeks. It took us a little bit to get going with all the traveling and extra work I've been doing, but we've finally got our momentum going. Hopefully it continues for the rest of the year. I’m also hoping to bike to work a little more often starting next week when I’m back to shorter hours. (trying to be ready to leave at 5 AM to bike in was just not going to happen)

This has been a summer of weddings. We were out in Dublin, Ohio two and a half weeks ago to celebrate my friend Andromeda getting married. I was afforded the honor of giving a reading in the ceremony, and I couldn't be happier for her and Jacob. They are an excellent pair and will take good care of each other. This weekend, my Uncle Ed (godfather) is getting married. It's supposed to be a small ceremony, but like any wedding seems to have gotten bigger as we get closer to the date. In any case, he and Jan seem to make each other very happy and I'm looking forward to the opportunity to meet some of her family. In just over three weeks, my brother-in-law, Marcus, is getting married. Char and I are standing up in the wedding, a first for both of us. I’m pretty sure Marc’s still only fifteen, but we’re excited about welcoming Molly and her two-year-old daughter, Sophie, into the family.

Well that’s enough for now, but this is the type of post I’m going to try to put out once a week. Just little blurbs about what’s going on. I pretty much stole the idea from Char’s updates that she posts on Fridays, but as the saying goes, “imitation is the sincerest form of flattery.” Have a great week!
Posted by Patrick at 8:55 PM No comments: