So, we're moving in about a month. Which would be a traumatic enough experience on its own (because, no matter how many times I've done it, moving always is) but made even more traumatic by the fact that we're moving in with my parents.

Let me first say that we hope this move will be very temporary, and how grateful we are that my parents are willing to take us in. However . . . fitting an entire apartment worth of stuff into my old bedroom is simply not going to happen. So, in addition to the pain of moving, and the awkwardness of running home to Mom and Dad after three years of marriage, we have to figure out how the hell we're going to fit our entire lives into one 11x12 bedroom.

Clearly we will be renting a storage space for the majority of our furniture, everything in our kitchen and bathroom, and probably a good chunk of our personal belongings as well. It's that last part that's causing the most trouble though. When it comes to all our "stuff" . . . what do we pack away into storage, not to come out again until we are back in our own place? It's kind of like deciding what to bring to your dorm room your first year of college, only harder.

Right now I'm transferring a lot of the recipes I regularly use onto nice little 4x6 index cards, so that I can bring a stack of index cards rather than a stack of cookbooks. And honestly, I don't know how much cooking I'm going to be doing anyway, but I'd still rather not lose access to all that information. Unfortunately not everything in my life can be so easily condensed.

The most recent blow in this whole situation, though, is the definitive decision that Slider won't be coming with us. We'd been worrying this whole time about whether or not our cat and my parents' dog would get along, completely forgetting that my brother (who is also moving home after being on his own for a year) is allergic to cats. So, while we knew that Slider might not be able to join us, it ended up being for a completely different reason than we thought. Instead, Pat's parents will be taking him for the duration. They live just a couple blocks away, so it's not like I can't see him whenever. But it's still going to be hard.

This next month is going to be incredibly stressful.
Posted by Unknown at 2:20 PM No comments:

Okay, so Pat is all sad that he hasn't posted in over six months. I haven't been doing much better. But, as I mentioned to him, I could post a lot more often than I do. I'm always thinking, "Hey, I should put that in the blog," and then I just don't. So, we're both going to try to get better about that. We'll see how it goes.

Anyway, last week I did something kind of stupid.

Important thing to know here, for those who don't actually know me: I'm overweight. Technically I am considered obese, but I don't like to think of myself as such since that brings to mind a certain visual image that I don't think I quite fall into, but vanity aside, yes, I am obese. I'm 5'3" and just over 200 lbs. I wear size 18 jeans. At my last doctor visit I was told that I'm actually in remarkably good health considering how overweight I am (blood pressure, cholesterol, etc are all fine) but then I'm still young. So, yes, I do plan to lose weight and get in shape, but like so many other things it just hasn't happened.

At any rate, now that the weather is turning nicer again, we've been going on walks whenever possible (though since I stand all day at Borders and come home pretty sore, we only go on my days off), I'm trying to control portions, drink water instead of sugary drinks . . . you know, baby steps. My mom also struggles with her weight, and recently she's been taking her days off (which is every other Friday) to visit my grandma and use her Wii Fit. About a month ago she invited me out there to join them.

The great thing about Wii Fit (I SO want one) is that it's a really easy way to track your progress. Before you start doing the exercises it measures your weight and BMI, compares it to last time, and you can set goals for yourself, for losing or gaining weight. So anyway, I go out there with her the first time, create my little Mii character, play some of the games, and set a 2-week goal for myself. Two Fridays later, I tag along again, and lo and behold I've lost 5.5 pounds over those two weeks! Sweet!

So, two more weeks go by, and unfortunately my work schedule has changed so that I'm working on Fridays now, so I can't go with again. This was last week. And now we finally get to the point of my story.

Thursday was an absolutely gorgeous day. And I was thinking about the fact that I wasn't going to get to work out this week (not that once every two weeks is really anything to fuss about, but I was still looking forward to it), and Pat was working, so I was just hanging around the apartment by myself. And I was thinking that I should get out and take a walk, just in case we didn't go for one that evening, and even if we did, two walks in one day wouldn't be a bad thing. But THEN, I came up with my stupid idea. Instead of just taking a quick walk around the neighborhood, I decided I was going to walk to the library. Which, according to Google Maps, is 2.6 miles from my place. 2.6 miles there. 2.6 miles back.

Back in high school I once walked from my house to the library, which is (again, according to Google) 2.2 miles. It felt like it took me forever, and if I recall correctly I ended up calling my parents for a ride home 'cause I just couldn't do it again. But that was before I went to college, and got used to walking all over the place all the time. Then again, college was three years ago.

Back and forth like that for about twenty minutes in my head before deciding to just suck it up and do it. It's really not that far, I decided, and it certainly wasn't going to kill me. Worst case scenario, if I was so much of a wimp that I couldn't walk home, I could just hang out at the library all day until Pat got off work and have him swing by to pick me up.

So I did walk all the way there. Took me just under an hour. Dropped off all my books, got a few new ones . . . sat around reading for about 45 minutes to recharge my legs . . . and then turned around and walked back. I was very surprised that it took the same amount of time to walk home. I was expecting to be huffing and puffing the whole way back, taking way longer now that I was so tired, but I guess my rest break did its work.

And honestly, I felt really really good. Tired, but really good. Until I woke up the next morning and my legs were KILLING me, and swore that I'd never voluntarily walk that far again. Well, now it's a gorgeous day again after a crummy weekend, and I'm actually thinking of making this a weekly trip. I go to the library about once a week anyway, why not get some exercise in? Pat tells me I should have stretched out before and I would have been fine. Fine may be an exaggeration, but I'm sure it would have helped, had I thought of it.

So anyway . . . we'll see. I'm not going to go today, and the forecast is actually calling for rain on Thursday (these are my only two days off this week) but we'll see what happens. If nothing else, I've taken back my vow of never doing it again.
Posted by Unknown at 9:50 AM 2 comments: 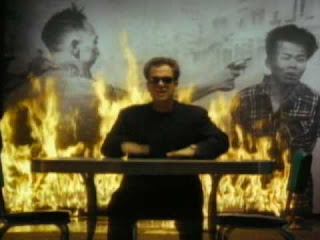 Ok, so this blog was my idea. I suppose I should post on it every once in a while. (ok, I just checked and it's been over six months since I posted...I fail...) Anyway...

Oh right, the title of my post. I like fire. I think it's fascinating. I like "playing" with bonfires when hanging out with friends or especially when going camping. I like the smell of burnt matches. I always loved being the one to get to light the candles at dinner when I was growing up. Those are good fires. Fires where parts of buildings are burning, however, are bad fires...

So Saturday, February 27th was a fairly uneventful day. I don't think I worked. I got some cleaning done around the apt. Charleen worked. She got home from Borders at about 10:30. We went to bed early. Again, uneventful.

Sunday morning at about 12:30 AM, there's a loud bang as our front door is busted open by firemen. They barge in and start yelling to get out of the building because there's a fire. Charleen and I scrambled to put on some extra clothing and shoes. I looked around and couldn't find the cat and was told to leave him. (grrr...) Found out later that he had run back and hidden under the bed. he doesn't usually do that.

Anyway, the fire was in the apt across the hall and one door down from us. The sprinkler system in that unit went off and alerted the fire dept. and it was out within about 5-10 minutes of them arriving. That's where the 3 hour wait began. Looking back on it now with a fully rested and rational mind, it makes sense that they needed to be sure to take the time to check that there were no more hot spots or any possibility whatsoever of a fire starting back up. At that early in the morning on a half hour of sleep and worrying about our cat still up in our apt and possibly running loose? Not so reasonable. After a bit and things had calmed down I did manage to get one of the firemen to check on Slider and he let us know that he was hiding under the bed and they had closed the bedroom door so he wasn't going to run away. That helped, but the next few hours were long and there were lots of questions about the girl who lived in the apt with the fire. And then there were even more questions about her boyfriend.

Finally at about 3-3:30 we were let back in to our apt and told to grab enough stuff for the next 4-5 days. Luckily both my parents and Charleen's parents live within about 20 minutes so we had somewhere to stay on short notice without waiting for the complex to arrange for us to be put up in a hotel. Thankfully no one was hurt, nothing besides our apt door was damaged, and we were able to get back into the building in a couple of days. It also was nice to know that Slider is perfectly capable of adapting to my parent's house after being there a few days.

So yeah, that was our excitement for the end of last month. I promise to post more often than once every 7 months...(hangs head in shame).
Posted by Patrick at 7:44 PM 1 comment: