Chili Dip (and other musings)

Wow, this has been the month of no posting. I mean, I know I used to go much longer than this, but after so many months of steady activity, it just feels . . . wrong.

Part of the problem is that I haven't had anything really worth writing about. In the past, when I've gone through a dry spell, I'll collect a bunch of "little thoughts" and eventually turn them into a bullet-point post, but now I typically just shoot out a tweet and am done with it. (I know, I'm so long-winded you wouldn't think Twitter and I would get along, but I'm getting used to it.)

This morning I had the realization of how nice it is to actually have a kitchen table where you can sit down. Normally ours is used for storage (our kitchen is rather lacking in that), and we eat with TV trays out in the living room. But last night we had some people over, so we cleared off the table, and it's still sitting there, mostly empty. I just ate my lunch in the kitchen . . . and by "in the kitchen" I don't mean "standing at the counter." I forgot how nice it is to be able to do that.

Anyway, this really wouldn't have been worth a blog post if not for the fact that I made chili dip, which everyone seemed to find as addicting as I do. I told them the recipe last night, which is so simple you don't really need to write it down, but figured I'd post it here anyway, as a reminder for them, and for anyone else who wants a quick and easy party snack. 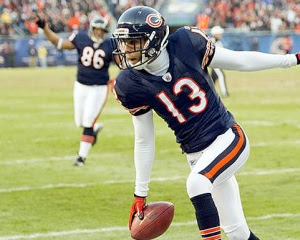 I'm sure I started liking Johnny Knox mostly because he wore the number 13. Many people have a problem with that number. I do not. I continued to like him because he was one of the best receivers we had seen in quite some time. I will concede that he was not a typical number one receiver for a team and would have made a great 2 or 3 option. He was still the best we had at the time, and his yards per catch prove it. He was also a great kick returner and made the pro-bowl for the 2009 season.

I would have liked to see him as a complimentary receiver to Brandon Marshall and Alshon Jeffery as his speed would have fit perfectly. Unfortunately in the 2011 season, he fumbled the ball and when both he and Seattle's Anthony Hargrove were diving for the it, they collided. At the time, Hargrove weighed roughly 282 lbs and Knox weighed in at 185 lbs. With the nearly 100 lb difference, Knox was the one to give. Specifically his back. The hit ended his season and most likely his career. He had spinal surgery the next day and the initial projection was that he would have at least 4-6 months of rehab in order to get back into normal functioning shape. Much longer to possibly return to football. He spent the final year of his contract on the Bears' physically unable to perform list.

Yesterday the Bears announced that they were ending their contract with Knox. Because he spent the entire final year of his contract on the PUB list, the Bears had the option to extend it. They chose not to do so seeing as he is unlikely to return to the NFL.

I enjoyed watching him play, and if he ever does come back, I will be extremely happy for him. Until then, I will wear my Knox jersey proudly as he was a fun football player to watch, and continues to be a very stand up guy.

Posted by Patrick at 5:08 PM No comments:

This is a quick update to let you all know that I'm not dead. There is so little point to this post that I'm not even going to post the link to Facebook or Twitter. (Hence, secret update. Only those who actually follow the blog will find it!)

Earlier this week, I meant to do a post counting down my favorite Super Bowl commercials this year . . . and then I never did. And now (since I don't have the time to do it now and we're going out of town this weekend) it will be next week at the earliest, and that just seems too late. But, maybe I'll still do it anyway. Or maybe I'll pick a random topic out of a hat. (Well, a metaphorical hat, as all my ideas are jotted down in a file on my computer, and not little scraps of paper.) 'Cause seriously, I need to get writing again, on a more consistent basis. (Actually I'm working on a super secret project that will help with that, but you'll find out more about that later, when it's not so super secret anymore.)

I just love that little guy!
Posted by Unknown at 1:25 PM No comments:

I've been sort of in a funk, lately. And one thing I've been thinking is that I need more concrete goals. Weekly, or monthly, or whatever. And they'd have to be things I actually have control over. So, for example, "lose 10 pounds" would be a bad goal; "exercise at least an hour three times a week" would be a good one.

It's not just weight loss, though, it's everything. I feel like I've been failing at pretty much every aspect of my life. (Except reading. I'm awesome at reading.) I know that one thing that's often mentioned as part of the culture shock of graduating and going out into the real world is that life isn't structured the way school is. With school, you're working toward something, you're getting feedback at regular intervals, there's a continuous sense of achievement. Out in the real world . . . well, some jobs work that way, I guess, but life itself doesn't. And while that's not THE reason I miss school, it's definitely A reason, one that I'm very aware of right now. So I need to transfer a little of that to my current situation, I think.

And, of course, what better place than the blog to keep track of all this? I mean, it's a way to keep organized, and to keep accountable. Only . . . where's the line?