Jay Cutler is on the Clock 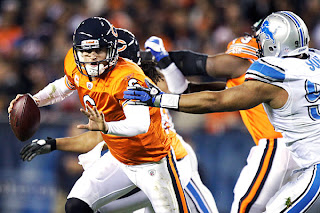 I've been very quiet lately. Work’s been busy. I've been spending time outside. I just haven’t been spending as much time sitting on the computer. Anyway, I thought I’d do another Chicago Bears post to get me started again.

If you've read my posts on the Bears before, you probably know that I’m a fan of Jay Cutler. I’m not his #1 fan or anything, but I have a lot of respect for him. I chose the picture above to illustrate a point. Jay Cutler is the best QB the Bears have seen in a long time, but there has been entirely too much of what you see above happening. Some of it is Jay’s fault for holding onto the ball too long and trying to make a play out of nothing. Most of it is the organization’s fault for having been too much in the “getting off the bus running” mindset for far too long.

The days of the QB who is simply a game manager who can simply hand the ball off to the running back are long gone (well…except maybe for Minnesota). Cutler has been in Chicago since 2009 and this is the first year that the Bears have truly decided to surround him with the supporting cast that a successful quarterback needs to have. Getting Brandon Marshall last year was a great move, but with the injuries that plagued the rest of the receivers last year. Defense against the Bears was simple. Over-cover Marshall, then squish Cutler when he had nowhere to throw the ball. Now he has the makings of a good offensive line to protect him, and a play caller who knows something about calling plays. From what I saw, Mike Tice was able to put together a reasonable o-line for what he had to work with, but a good play caller he was not. Now we’ve got a guy who is supposed to be a real whiz kid when it comes to play calling and from what I’ve seen from OTAs, the plan is to nip the sack count in the bud.

Now to get back to the title of the post and my long and meandering point. Assuming the line performs like it’s supposed to and Mark Trestman has a reasonable game plan in his head, Jay Cutler is out of excuses. As I’ve said before, I’m firmly in the camp who believes that those excuses up to this point have been legitimate. I imagine it’s hard to look like a great QB when you’re getting knocked on your ass every other play. However, if he doesn’t have a stellar year this year, Jay Cutler will have no one to point the finger at but the guy in the mirror.

That said, I think the combination of the surrounding cast and the last year of Jay’s contract will add up to one heck of an offense this year. With Alshon Jeffery coming in with a little more experience under his belt, a tight end who can actually catch a ball, and someone who understands that “run Matt Forte up the middle” doesn’t actually work, I’m excited to see what the Bears offense can do this year.