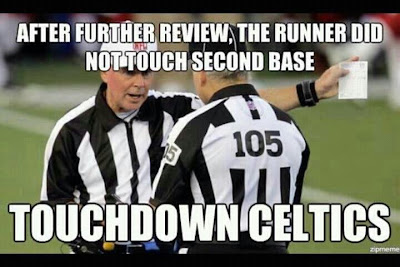 There's been a lot of controversy around the league regarding the replacement refs in the NFL. Some have been grumbling about every play, some say the replacements aren't any worse than the regular refs. Some are blaming them for wins or losses of their favorite team. Some don't care as long as their team isn't too badly affected. A lot of people don't know what to think. I think the best way to illustrate the confusion the situation has brought was what happened to me yesterday. I was in the office and the hot topic of the morning was the previous night's game. I shared my opinion on the poor officiating and then someone asked me a question I don't think I've ever been asked...

Someone asked me if I was a Packers fan.

I'm giving that its own paragraph to truly let that sink in. I grew up 20 miles from Chicago. My dad worked downtown. I've been a Bears fan since before I knew what football was. The Bears and Packers have the oldest rivalry in the NFL. I have the Bears' schedule up at my cubicle. So no, I'm not a Packers fan. I'm a Bears fan, but I'm also a football fan. I love watching a great game of football as long as I have a reason to cheer for one side or another.

I was cheering for the Seahawks on Monday. I cheer for almost anyone over the Packers. The Lions and the Steelers are the only exceptions. So normally when the Bears win one week and the Packers lose, I should be ecstatic. I should be able to come into work where I'm surrounded by Packers fans and gloat...

But this week that was taken away from me. This week gloating about a Packers loss would be like gloating about them losing a coin flip. The Packers lost an unfair game. Don't misunderstand me. The game could have gone either way. From my perspective it was reasonably called until about half way through the 3rd quarter. After that point, it was so poorly called that neither team was allowed to play properly. It was like watching a neck and neck footrace, but then down the home stretch, random people were allowed to run in and trip both runners. The Packers just happened to be the ones who got tripped closest to the end. So in my opinion, this game in particular has a huge asterisk next to it. The Packers may have lost a fairly called game, but now we'll never know because the game was taken out of either team's hands.

Do I think the Bears have had their record altered because of the refs yet? No, because the games they've been in haven't really been that close. When they have some closer games, I'm sure I'll think differently because this is what we can expect from any close game for as long as the league and the real refs can't come to an agreement.

Edit (Thursday morning): Pat's at work right now, but he tells me a tentative agreement has been reached, and the regular officials will be back for tonight's game. This is important for a lot of reasons, but all I can say is, it's about time!
Posted by Patrick at 4:36 PM