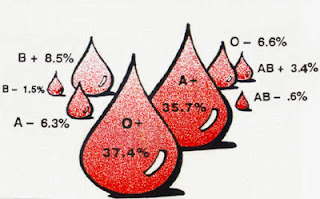 Switching gears a bit here. For whatever reason, I haven't been looking forward to writing any of my Bears blog posts with the exception of the first one. So, instead I'm just going to write whatever comes to mind. Ok, back to the title of the post.

Given that my mom used to be a nurse and my dad was always in and out of the hospital, I've had a bit more exposure to that sort of thing than a lot of people. For example, I've known my blood type for as long as I can remember. I thought it was weird when Charleen didn't know hers. (she does now by the way). I'm type O+. Basically what that means is that I'm the second best blood donor by type there is. About 85% (source) of the people in the US are RH positive, and my blood can be used to donate to all of them.

So basically I should probably  be donating at least a few times a year. The reason I haven't been? Well, I never donated through high school or before. There's no real reason why, I just don't think I remember too much exposure to blood drives or anything like that. In my freshman year of college however; there was a blood drive on campus. Knowing my blood type, I figured, "why not?" I've never been a big fan of needles. I'm don't have an irrational fear of them, they just kinda hurt and I'm not a large fan of pain. Anyway, I go through all of the preliminaries (height, weight, hemoglobin test, blood pressure). Everything checked out fine so on to the donation. They get the needle in my arm and while it wasn't the most pleasant feeling in the world, I figured I could deal with it for 5-10 minutes...and then they noticed that blood wasn't flowing. I had clotted the needle. The method for addressing this? Shake the needle a bit while it's still in my arm to try and knock the clot loose. It worked (and it hurt...a lot) and we went on with the donation...until I clotted the needle again. Wash, rinse, and repeat and by the 3rd time I had clotted the needle, I decided that I was done. The disappointing part is that since they didn't get a full pint, they had to throw it out. So all of that for nothing. That was 11 years ago, and hadn't tried donating since. Every time it came up, I just thought of that experience and couldn't convince myself to do it.

On Tuesday, John Deere had a blood drive at work. A coworker of mine was planning on going and had mentioned it earlier in the morning. I was still trying to play catch up since I was on vacation on Friday and Monday so I didn't even remotely think about going. Well, later that day after things had calmed down for me, he still hadn't gone and again asked if anyone wanted to come with. I spent about 5 minutes mentally talking myself into it and we headed off to the factory auditorium to donate.

ZERO PROBLEMS! Long story short, it hurt more in the 30 seconds while I was holding gauze on the wound after the fact than the entire donation did. Piece of cake. I got up, had my cookies and juice and went back to work. I got a little light headed later that evening, but other than that, I was fine. In 51 more days I can donate again, and I think it'll be something I do more regularly.

It's an unfortunate fact that donations don't go well every time and even more unfortunate that it went so badly on my first try, but I'm glad my second experience went so well. Anyway, my point in all of this is that I'm glad I gave it another try.

Patrick
Posted by Patrick at 12:04 PM