More from me soon™ 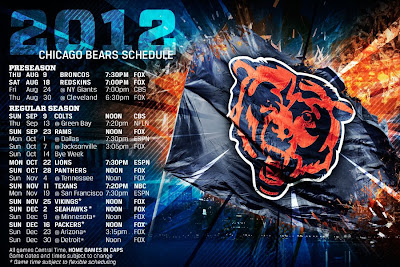 My soon will be significantly sooner than the trademarked version. Anyway, I like Charleen's idea of doing a weekly themed post so I'm going to start writing a review of the Bears games every week. I can't promise that I'll have it posted Monday of every week, but for Sunday games, I should have it done by Tuesday at the latest. For Thursday and Monday night games, I'll probably have them posted within two days.

Right now, the preseason games are going on. In fact, the Bears' last game is tomorrow, but there really isn't much I can tell you about how the team is doing. Preseason games are for the coaches and the players, not the fans. In reality, they're just glorified scrimmages/tryouts. Fans can go to them to cheer their team on, but there is very little we can take away from these games. Wins and losses don't matter. Just talk to the 2008 Detroit Lions to let that sink in (4-0 Preseason, 0-16 regular season). In addition, it's hard to tell in some cases how players or a unit is going to perform especially in cases where coaches are trying to make starting lineup decisions.

Take the left tackle battle for example. While they didn't allow a sack, the offensive line looked pretty bad against the Giants. Does this tell me that the offensive line is going to be horrible all year? Well...maybe, maybe not. There are 2 players that are battling for the starting position at left tackle so it's a good bet that Mike Tice, the offensive coordinator, is calling plays that will force these two guys to have a one on one matchup with the defensive players. He's said in the past that he plans to put the LT in a position to succeed which includes getting a little help blocking if needed, but right now he's trying to see what each guy can do on his own. Is this for sure what Tice is doing? I don't know, I'm not him. I also have no idea what kind of schemes the Giants' defensive coordinator was running or if he had any lineup battles going of his own. The point is, neither team is playing to win. They're playing to figure out their final rosters by the end of the week and to give the rookies a taste of the NFL before the season opens. That's it.

One thing I can take away is that the Bears seem to have gotten who they thought they were drafting in the first and second rounds. First round pick Shea McClellin is not to the point of taking a starting spot yet, but the bears picked him up for rotation depth and a motor that doesn't stop. He's made some rookie mistakes, but boy is he an energizer bunny. He does not stop trying to get at the ball 'till the whistle blows and that's great to see. Second round pick Alshon Jeffery seems to have been a steal in the second round. He's a large receiver who can get open and fight for the ball. I won't be surprised if he becomes the starter over Devin Hester very early in the season. Aside from those two players, there really isn't a lot that I've gotten out of the preseason.

So, apparently I had more to say on the subject than I thought, but most of that was explaining why fans can't read too much into the preseason. Weird post. Oh well, the regular season kicks off for the Bears on Sunday, September 9th. We'll be driving back from Lombard after the game so I will not have my write-up done that evening. Maybe Monday...we'll see. 'Till then, enjoy the rest of your summer everyone.
Posted by Patrick at 8:55 PM