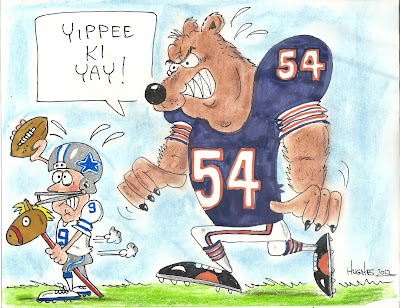 That's right folks, Tony Romo, the Cowboys' quarterback, threw more touchdown passes for our team than he did for his. A big showing from the defense once again in a 34-18 blowout of the Dallas Cowboys resulted in 5 turnovers, 2 of them were returned for touchdowns by our defense. One was from Charles "Peanut" Tillman  He's an amazing cornerback who is truly a turnover artist. It's always nice to see him get some credit for interceptions and get some points on top of it. The second turnover returned for a TD was from Lance Briggs.

Ok, so this one deserves its own paragraph. Here's the setting: On the previous play, we had just turned the ball over to the Cowboys at our 24 yard line on a fumble from Jay Cutler (more on him later). The very next play, Henry Melton pops the ball out of Romo's hands right into the hands of linebacker Lance Briggs. He ran 74 yards for a touchdown outrunning the entire Dallas offense! It was a thing of beauty. He had to sit out for a few plays after that (come on the guy's a linebacker), but it was 6 points on the board all the same.

What's even more impressive is that our offense put up 20 points against the leading defense in the league (as of week 3). Cutler's fumble was really his only bad play of the night. He threw for 275 yards and 2 TDs. It was an impressive showing from him and the rest of the offense including the offensive line. If the Bears keep playing like this, it's going to be an exciting year.

Now, as a Bears fan, I don't like the Packers, but I dislike the Detroit Lions even more so, I'll end with two amusing facts. First, the Lions are 1-3 and sitting at the bottom of the NFC North. Second, after starting last season 5-0, the Lions have since gone 6-10—including their playoff loss to the New Orleans Saints.