We won against a division opponent! I quite enjoyed watching this hard-fought game against the Lions. Sadly, the Vikings and the Packers both won their games, but I'd rather that than us lose and they win. On a side note, I no longer appreciate Monday night football games. I'm way too tired the next day.

I'll start with the bad/not-so-good section so I can end with a high note. As I've mentioned before, I'm still a little concerned with the offense. We started out with a touchdown on our opening drive! That was fantastic! But then we only got 2 field goals for the entire rest of the game. The second half offense gets a bit of a pass on this one. Jay got hurt in the second quarter and though he still played, there wasn't much confidence in his passing abilities. This made us a one-dimensional offense and pretty much all the Lions had to do was stuff the run. Still, we were able to run out enough clock, not turn over the ball, and pull out the win. Jay's ribs will be something to keep an eye on next week against Carolina.

One other thing I will note about that play where Jay got hurt. Ndamukong Suh may have been a bit excessive in driving Cutler to the ground, but it definitely wasn't the dirtiest play I've seen. In addition, it seems that he may be showing signs of maturing a little. After the play, once he turned around and saw Cutler still on the ground, he went over to check things out. He genuinely looked like he was concerned that he had hurt Cutler. Given how I've seen him play and act during games, this was an improvement. It would be nice to see him leave his helmet stomping days behind him.

Special teams has been something else that has been worrying me as of late. Hester hasn't been getting the greatest blocking, and when he does, he calls for a fair catch or lets it bounce badly. Part of the offensive problems involved us starting inside our own 10 yard line for at least 3 drives. They'll definitely have to get out of this funk to put our offense in the best position to succeed.

Ok, enough with what I'm not excited about. On to what made the game fun! 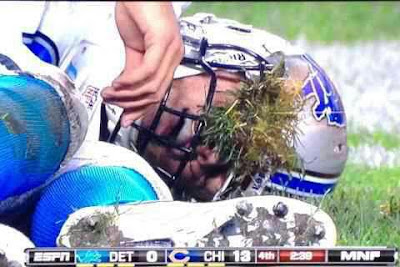 This picture pretty much sums up Matthew Stafford's night. Cutler may have been sacked 5 times to Stafford's 3, but it was definitely Matthew Stafford who was running for his life all night. The front 4 was brutal and got in his face consistently. Shea McClellin had probably his best game so far this season. One of Julius Peppers' sacks came when Shea chased the QB right into his arms. We're a team that's known for getting turnovers, but the timing of them on Monday was amazing. We took the ball away 3 times in the red zone and prevented points. The Lions couldn't develop a rhythm, couldn't get a run game going, and were shut out until there were only 30 seconds left in the game. I don't think there's a more feared defense in the league right now, and it's fantastic to watch.

Though the entire defense was amazing on Monday, there's one player who deserves a special shout out. Charles "Peanut" Tillman may have a new nickname: Optimus Prime. He was able to utterly shut down Calvin "Megatron" Johnson. Calvin Johnson is easily the best wide receiver in the league. Tillman only allowed him 3 catches and 34 yards. His average this season coming into the Bears game was 111 yards. He's Stafford's favorite target, and shutting him down was 90% of shutting down the Lions' offense.

I'm looking forward to what our defense does to a struggling Carolina Panthers team next week.
Posted by Patrick at 5:15 PM