I’ve been going back and forth on how I feel about the situation with Urlacher in Chicago. For years Brian Urlacher has been the true face of the franchise. Coaches have come and gone. Quarterbacks have really come and gone, but good ol’ number 54 has stayed the same. The immovable object in the middle of the Bears defense. The heart and soul of the team. “Quarterback” of one of the best defenses in the NFL. Ask most any Bears fan or player and if they could, they’d keep it that way forever.

Unfortunately, the hands of time are not so kind in football. Good ol’ 54 has started to replace that apostrophe with the “d” to still be good, but also getting old. In most places, 34 is not considered old, but in the NFL, it is. Now I’m not so involved in watching defenses to see that he’s truly lost a step or two in his on the field speed. What I do see is that he’s been out for several games the last few seasons due to injuries. It’s sad to say, but he’s not the monster in the middle of the field that he once was. His instinct and intuition are as sharp as ever, but if he’s not able to stay on the field, it doesn’t do much.

I’m sorry to say that I let his comments towards the end of the season tarnish my view of him. I’m trying not to. He made a comment that the fans and the media are two of the people that he doesn’t care about. Media, I agree with him completely, but the including the fans in that statement stung. I’m trying to remind myself that this was in response to a comment that fans and the media were calling for Lovie Smith’s job. It also came right after a tough home loss and he was in a bad mood. I know I’ve said things I didn’t mean and regretted saying when I was in a bad mood. Thankfully, I don’t have the media following me around to record every little thing I say and use it against me later. So again, I’m trying to let that one go especially since everything I’ve heard about how he does interact with fans that request autographs or just want to say hi is always very positive. Off the field, he sounds like one of the nicest guys you’ll ever meet. He just had a bad day and was sick of hearing people insult someone he respects.

How his departure from the Bears went down was…confusing. When you hear it from Urlacher’s camp, it sounds like the Bears blindsided him. He made a high offer to start and expected to haggle back and forth a bit. The Bears made a counter offer. When he said no, the Bears announced that they were parting ways with Brian because a deal couldn’t be reached. The parts where this gets confusing are twofold.

The first is how quickly the Bears organization announced that they were parting ways with Brian. It seems like the Bears knew that he wouldn’t accept their offer and that they had no intentions of haggling. That’s the only explanation I can offer for the rapid press releases and quotes they had prepared regarding their parting ways from the long-time face of the franchise. This could be because they had already decided they didn’t want him on the team and just wanted to save face by saying that they made him an offer. It could also be that they had a good idea that he was going to want a lot more money than they thought he was worth and didn’t want to waste time haggling only to come to the same result. Instead they wanted to spend their money on getting some decent replacements before they were picked up by other teams. The only ones who know the answer to that are in the organization. All I can do is speculate.

The second confusing part about the situation is Urlacher’s reaction to their offer and their announcement. The news was flying in quickly, but I got three things out of it. The Bears had announced that Brian Urlacher was not going to be playing for them next year, the news came as a bit of a shock to Brian, and he was calling their offer an ultimatum. The last two are the parts that have me wondering how things happened. If he thought their offer was an ultimatum and they actually said, “this is it, take it or leave it”, then why would he be confused that he was no longer on the team if he said no? Or is the timing of the quotes a bit muddled because of how quickly they came in and he didn’t realize that their offer was an ultimatum until after the announcement? Again, I can’t know. I wasn’t in the room for the contract discussions.

The bottom line in all of this is simply that football is a business. I would have liked to see Brian in a Bears jersey for at least one more year and then gracefully retiring (hopefully after a Superbowl ring), but often that’s not the way things go. It is a business. The market value of a player is whatever a team is willing to pay him. So far, that $2 million deal that the Bears offered to him is the best offer he’s gotten. Now, it has only been a week since the parting, but so far it sounds like there hasn’t been much interest anywhere else. That leads me to believe that Urlacher’s agent (and therefore Urlacher) didn’t have a good understanding of what his market value truly was. That brings me back to what I said earlier about the Bears or more specifically Phil Emery knowing in advance that Brian wasn’t going to accept the deal they offered, one way or the other.

Brian Urlacher, number 54 was one of the greatest middle linebackers to ever play the game. He was fun to watch and cheer for. When he was in the game, opposing quarterbacks knew that they were in for a tough game of cat and mouse. I will be extremely happy for him WHEN he is inducted into the hall of fame. Brian Urlacher truly represented the phrase “Monsters of the Midway”. Thanks for 13 years of great memories. 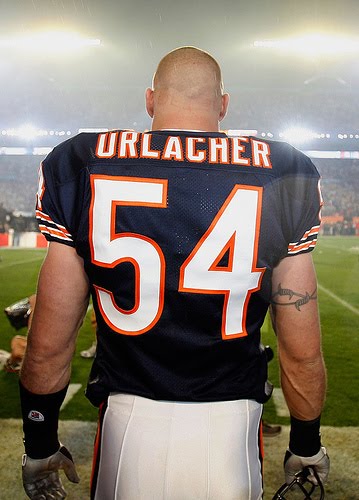